Unbelievably, it has been a year since 70 people descended on Derby’s Silk Mill and Derby Museum and Art Gallery to participate in MuseomixUK 2014. MMUK14 came from a similar weekend at Ironbridge Museums Trust in 2013 where seven other prototypes were created at the first MMUK following Mar Dixon’s desire to introduce the French event here.

For 2014, people came from Derbyshire, London, Denmark and even Birmingham! Some worked in museums, others were business-owners, volunteers from other sectors and software designers. Not filling the room with ‘people like us’ was definitely a strength!

The aims of MuseomoxUK were to challenge how people view museums and themselves through openly promoting trans-disciplinary collaboration and building a supportive community. Participation was not to be underestimated, in the time from arriving on Friday morning to final delivery on Sunday afternoon several milestones occurred.

Having such a demanding weekend would not work without the full collaboration and trust of all participants involved. Each was asked to contribute a small amount of money to cover the food and drink and they supplement that with their expertise, genius, energy, humour and sometimes other emotions.

The experts (ideally) formed teams of six to include a coder; fabricator; communicator; graphics person; mediator and content creator. They had the opportunity to work with their passion without office politics, restrictions (within reason) and could be as bold as they dared given the time restraints. Naturally there was some anxiety, pressure and awkward conversations to be had, however that was viewed as necessary to the process and as all involved were professionals and self selecting as experts in their field everyone behaved as an adult.  As Taylor Swift notes, “we don’t need to share the same opinions as others, but we need to be respectful”

The ‘strongest steel is forged in the hottest fire’ might illustrate the experience, however it isn’t hard to imagine the shifts in emotions ranging from uncertainty to pride and satisfaction, from start to end, and an all encompassing emotional roller coaster occurring in the middle.

We discovered this experience using ongoing evaluation throughout the weekend. We asked participants to place a bit of lego in a named box to indicate their mood; inspired, challenged, collaborative, frustrated, confused or low. Encouragingly the negative emotions were seen less frequently and with the measure of inspired and collaborative being the highest readings.

Less easy to measure were the intangible benefits and outputs. An evaluation of participants, before, during and after is accompanied by one with the public and these gave varied responses and areas to celebrate and some to improve. For example on the public day, 100% of respondents said that the exhibits had enabled them to experience Derby Museums and its collections in a new way AND appreciated how prototypes used different senses and how digital components can make exhibits more accessible.

With half of all participants responding to the post-event evaluation we have a strong sense of how they viewed the weekend and in the spirit of collaboration: the majority felt they learnt something new

“I updated my faith that things go wrong, but in a useful way! I learned how calmness and positive thinking can help group dynamics a lot.”

“How cool are people when they come together to achieve something as a team?”

“I always think of myself as someone who has to lead to feel valued, but I really enjoyed being part of a team and acting in a supporting capacity. Mind you, my team were awesome.”

“Sometimes if felt a bit like work and some power politics perhaps.”

Such a project is guided by the host organisation and Derby Silk Mill proved to win people over:

“Amazing to see Derby Silk Mill like that, I will certainly be an advocate of it now. Entirely refreshing …”

“Derby’s ideas of making and community building is great and it was humbling to be a small part of the bigger picture they are developing there.” 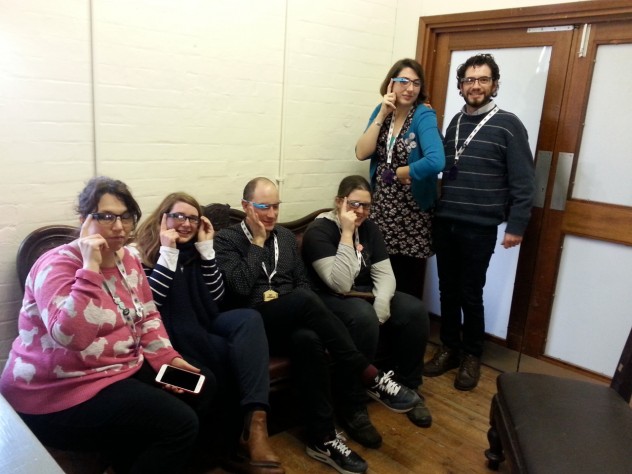 Our overriding experience was answered by those who would like to do it again; one said no, and the rest of the respondents were positive to consider it with 75% a definite yes! Since then, 95% of respondents have remained in touch.

We followed up the event with online and real life meet ups and there was an appetite to maintain the community beyond the annual event. We think there is something to be capitalised, (especially the inspiring and collaborative elements), to build relationships and help with career professional development and peer support. During austerity measures, organisation training is reduced and as more people have portfolio careers the MMUK team have decided to take the idea further and deliver regular sessions for CPD, learning and keeping in touch.

So you might ask, “Why do all the work to recruit participants, build relationships with museums like Derby, and do it voluntarily?” The outputs from such a weekend include tangible prototypes, which may prove very useful in Derby Museum’s HLF plans. It brings economic impact to the area in hotels, travel, food and the odd beer in the Silk Mill. The local audience is given an opportunity to see some new ideas and boundaries being pushed. There are few museums which provide widespread prototype testing or allow any part made exhibits to be seen by the public in gallery, thus we reveal little of the museum magic.

Since MMUK 2014, we have started Open Community Lab to bring the skills and expertise to sectors outside of museums. OCL’s first event was a #KidsRemix at Birmingham Open Media lab in August and proved very successful, with young people aged 6-12 staying an average three hours engaged in activities from computer coding to crafting.

What I do in the normal world: Work at a small medical museum at University of Worcester

I can help with: Happy to do almost anything. I am useless at baking, singing and approaching strangers. I can tweet, do online things and maybe hug at a push.

Why I contribute to Museomix: Having participated in 2013 it provided a memorable experience with great team members and helped in building confidence, and knowledge about many areas.