Lunar21 visited the night market which has become a semi-regular feature of the Cathedral Quarter shopping calendar.  Sheena Holland, a local fashion designer and maker, began organising markets in 2014. Being one of the original store-holders of the Birmingham Vintage Market that began in the early noughties at the Custard Factory, Birmingham  her pedigree of just what the experience should be was second-to-none. Markets are now a key growth area to her business, as well being recognised by the City Council as a driver to foot-fall in Derby city-centre.

The last Night Market reached a foot-fall of over 7,500 and the latest was expected to top 10,000. Businesses up and down Saddlergate and the surrounding streets remained open late as shoppers sought food and refreshment.

The Night Market features a range of local businesses selling everything from bespoke cocktails to vintage clothing.  Live performances and character theatre add to the unique atmosphere. Of particular note was the ‘Moaning Lisa’ doing the rounds in the Bell Hotel Ballroom, which also doubles as one of the main indoor areas for the market.

Pop-up coffee shops and bars were dotted along Saddlergate, and shoppers tempted into Blacksmith Yard with live music and the smells of pop-corn and a multitude of different cuisines.

Sheena Holland is organising a number of different themed market events in Derby. The next to be held is the Food and Drink Festival, starting from 11.00 on the 13th June 2015.

Sheena’s website describes the Food and Drink Festival as:

“A representation of the great food and drink in Derby with local exhibitors, a street food vibe with a browse and wander feel to the day. Look and sample, watch chefs and be inspired or simply relax with a drink in a Prosecco Parlour or beer garden and listen to live music at this first festival of food in Derby’s Market Place.” 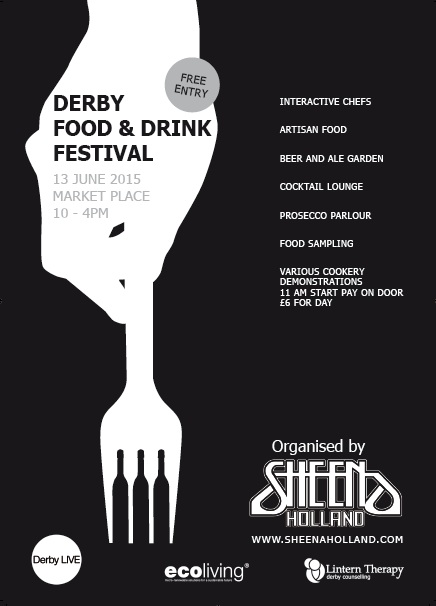