The presentations and discussions following them, were probably some of the most thoughtful we had encountered during the 8  years of Lunar21 activity.

Staff working for the Derby Museums Trust had successfully engaged local people in re-making the Silk Mill Museum, and in creating a truly world-class utterly beautiful display in the Nature Gallery in Derby’s Museum & Art Gallery.

Meanwhile Derby City Council’s Local Area Coordination initiative has succeeded in unlocking potential from some of Derby¹s more disadvantaged communities, so that people¹s lives have been rescued from really pressing problems, which they then move on to support themselves and others.

The constant factor in both situations appeared to be skilled staff, willing to make the most of people¹s skills and talents, and then support them to create something special. It was really inspirational to hear just just how much creativity exists within Derby’s communities, if only we can ask the right questions, listen carefully to the answers, and then support the taking of action.”

The full moon waxed, hailing the arrival of the Autumn Lunar21 live event again. Excitement has been growing within Lunar21’s walls. Plans had come to fruition and a positive mood had overtaken the organisation of this event.

Held at the Silk Mill, Derby, this Autumn event was also the first chance Lunar21 had to test out our website based booking and email system. We hope it was a positive experience for all our supporters who came to us via this route!

The theme chosen the ‘power of co-creation‘, was inspired by the conversation our founder, Graham, has had with inspiring individuals around Derby in the previous six months.  Two pairs of speakers had agreed to present, both discussing very different projects, but with the common thread of  reciprocal working and collaboration running throughout. 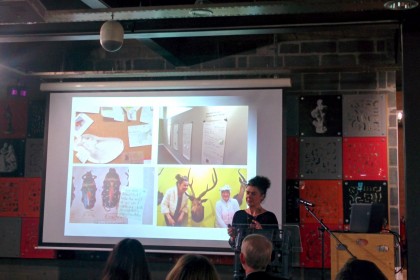 The first pair of speakers, Andrea Mercer and Andrea Hadley-Johnson, were from our new partner (more on this later!)  Derby Museums.  Derby Museums  has embraced co-creation, absorbing it into every fibre of work it completes, from making display stands through to programme planning.  The Andreas, both facilitators of this process via their own specialisms, came to enlighten the Lunar21 audience about their successes and future plans.

The ambitious and creative plans of Derby Museums around the ongoing redevelopment of its Museum and Art Gallery and SIlk Mill sites were unwrapped. From developing a LEAN approach to prototyping exhibition stands  with community job-seekers, working in the SIlk Mill woodworking shop learning new skills, to crowdsourced gallery project-labs, the DMAG way of working is forging ahead in creating the museum thinking of the 21st Century. it is evidently an approach the works, with the award of £11 million from the Heritage Lottery Fund. 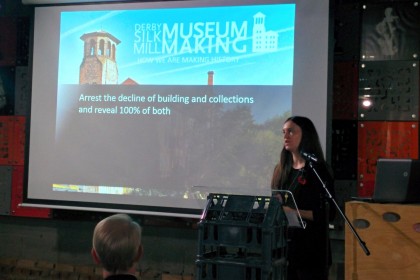 “it was a pleasure to talk about ‘creative co-production journeys’ with an interesting and engaged community of people. What a stimulating environment to have such a discussion in too!”

The second pair of speakers for the evening, Neil Woodhead, of Derby City Council and Janine Cherrington, Head of Service at Transition2, have championed the principles of co-creation through their work supporting young learning disabled adults at Transition2 and within ten neighbourhoods of the city through the Local Area Co-ordination team. Their aims; to support people traditionally
labelled as vulnerable and dependent to develop the links, relationships, networks and connections within their local communities that will support meaningful and sustainable community lives built on a foundation of their gifts, skills, passions and interests. 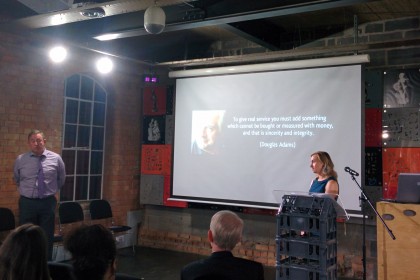 The approach delivered by Transition2 and the Local Area Coordination team has been shown to produce better outcomes for the individuals they support but also local communities and services.

Both Janine and Neil shared examples of how the asset based approach they have adopted has gone on to have a significant impact for the people they work with & has also shown to have positive sustainable outcomes for families, communities and services.

More information can be found through the following links:

The evening rounded off with some healthy debate on just what co-creation was and how it could be used to develop the city of Derby in the future.  We hope if you were unable to join us for the evening that you will explore some of the excellent content curated on the Lunar21 website around the topic of co-creation or sign up to our newsletter via our homepage for details of our next event.

1 comment on “The Power of Co-creation, event write up” Add yours →

Comments are closed. You can not add new comments.